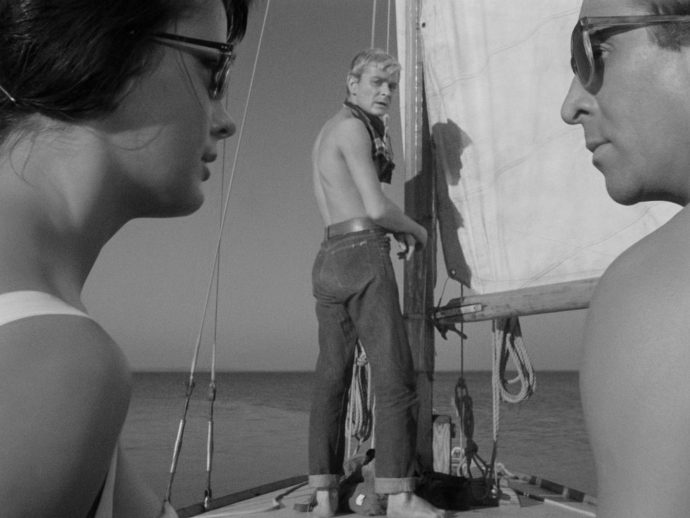 The Open City likes to play with ideas round boundaries and restrictions, whether cultural, physical or mental. We are delighted therefore to announce a new programme; Cinema Architecture 2018: Itinerant Movies.

The selected films are entirely shot along waterways all over the world. These navigations aim to connect distant moments, sites and places suggesting a cinematic voyage to the film spectator that moves along an imaginary path.

Sailing along the Maas river by boat, moving across New York in a limousine or flying over the Robert Smithsons Spiral Jetty in a helicopter channels the perception of the landscape in a linear way: what is left behind is the known territory, what lies ahead is the unknown. Through this process the space is revealed to the spectator gradually, building up their own memories, associations, expectations, creating their own mental map on the way.

Deconstructing and reconstructing the architectural space depicted in the film engages the spectator in an active process of discovery.

Nó w wodzie (Knife in the Water) Roman Polanski, 1962
Knife in the Water tells a story of limited spaces and intense circumstances. The film is Polanskis first feature film, a brilliant psychological thriller. Andrzej and Krystyna are driving to a lake to go sailing when they come upon a young man hitchhiking in the middle of the road. When the traveller joins the couple on their journey, psychological warfare breaks out as the two men compete for the womans attention. Secluded on this boat in Polands Masurian Lakes district, with conditions ranging from aggressive storms to dead calm, there is nowhere to escape, and changes in weather signal changes in mood. The characters are entirely isolated; not even random extras appear in the background. With stinging dialogue and a mercilessly probing camera, Polanski creates a disturbing study of fear, humiliation, sexuality and aggression.