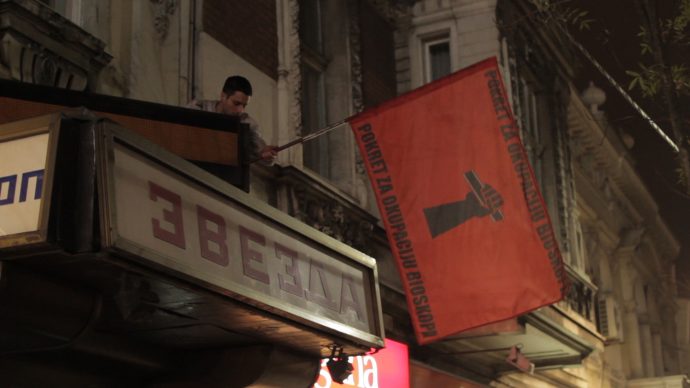 For its 10th anniversary, Kino Climates presents a one-day, intensive and eclectic programme that reflects the mix of upbeat pulses animating the venues and organisations that make up its network of European independent cinemas and micro-cinemas. A lively combination of films, performances and debates offer a unique opportunity to identify where these independent initiatives are taking place and how they are sustained.

Documentary about the Staatsliedenbuurt, autonomous zone in Amsterdam, in 1984-1985 by Barbara den Uyl, who lived there. An eye-witness report on the war that the neighbourhood’s squatters and original inhabitants waged with the state. Fabulous historic footage of the widely-supported resistance during the tumultuous 1980s in Amsterdam.

A compilation of recent works conceived as a melting pot of genres and styles. An eclecticism of choices and inspirations that animate the Kino Climates network.

Filmmakers, activists and workers reclaimed a formerly state-owned Serbian cinema that had been privatised and left to ruin. This film chronicles the romantic ambitions and stark realities of such movements. It also serves as an important reminder that the projection of a film for the public is a political intervention all its own.

Cinema is a communal space, but it is rare that community is properly attempted inside the auditorium. Kino Climates celebrates a different mode of film exhibition – collective and participatory, convivial and experimental. Representatives from across the network will reflect on the utopian method at the heart of their cinema communities.

Coming straight from Bristol, England, this programme is a transplant of the Cube’s unique programming and eclectic style all the way to IFFR.

Some members of Kino Climates actively defend experimental cinema, and may even have their own laboratory. A lively mix of handcrafted pieces.

OJOBOCA uses film and slide projectors for anaglpyh 3D images, stroboscopes and music to evoke a magical world in answer to an unhappy history. Supported by Goethe Institut.