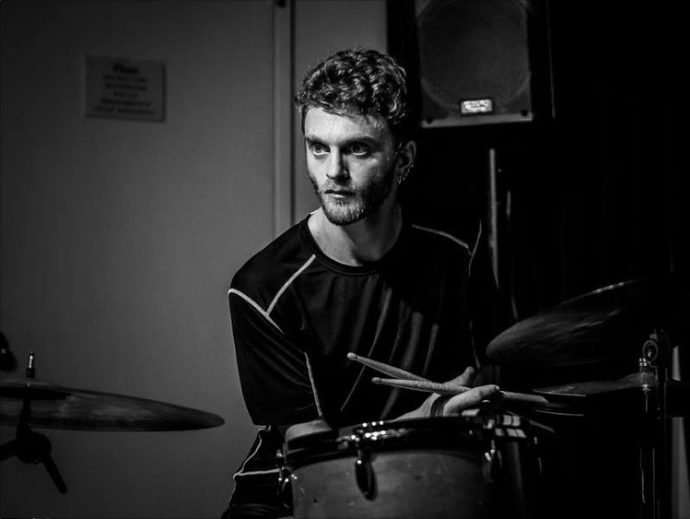 The Avantgardistic State welcomes improvisations and experiments that open up new sonic vistas. We are delighted, therefore, to invite two masterful acts to shake down the walls on Boomgaardstraat.

Greg Fox
New York City born-and bred, Greg Fox is a drummer and a multidisciplinary artist and teacher to boot. His energy knows no bounds it seems; working on around 50 records in the last decade (in a variety of guises); including work with Liturgy, ZS, Ben Frost, Colin Stetson, Skeletons, Hieroglyphic Being, Man Forever, and others. We can add his own solo work and his projects GDFX and Guardian Alien to the pile. Fox was awarded “Best Drummer in NYC” by the Village Voice in 2011. And Chris Richards from the Washington Post was moved to write: “Good drummers aren’t uncommon. Great ones are. We still mourn Keith Moon of the Who and John Bonham of Led Zeppelin as the jolly bashers of modernity. Here comes the future, they seemed to be telling us with their sensational ka-blammo. Together, they popularized the notion that, in rock-and-roll, a drummer’s unsolemn duty is to establish a sense of time while happily smashing it to bits. Greg Fox reactivates that idea for the Information Age.”

The NOO Ones
With Wu Wei, the world-famous player of the sheng (the Chinese mouth organ) at their centre, the NOO Ones create a “music of the moment”‘; rich in sound and one that employs a wide sonic spectrum. The band utilise a unique combination of instruments, something that allows stunning contrasts in dynamics, sound and pace.

“The new LP (Zwerk) […] keeps the listener at the edge of their seat, as a new twist may come at every moment.” Ton Beetz – Jazzflits

“A remarkable band, impossible to classify, and using instruments you could not imagine in your dreams (bass sax, shakuhachi, violin, steel-guitar, guitar, sheng and percussion)”. – Eddy Detemeyer