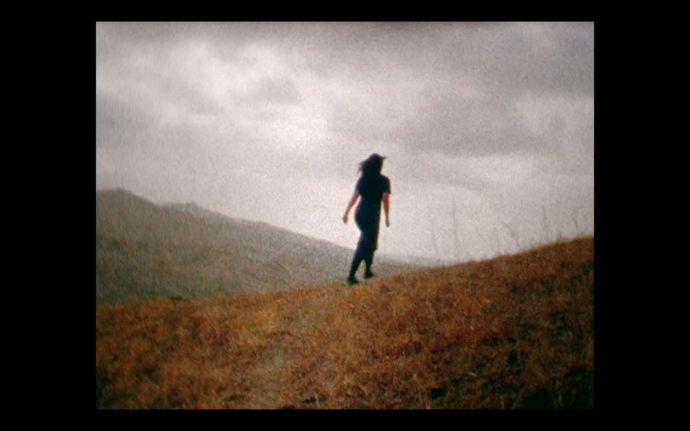 GHOST invites OYESYES to curate and present the upcoming screening session. For the past two years, OYESYES (Raluca Croitoru) has organised regular screening sessions of films by women directors in ONONO project space.

The event will open with a reading of a hybrid form poem by Jasmina Al-Qaisi, originally published in 2018 in CUTRA, a pop-feminist magazine based in Romania. “Where does it hurt you (when you tell me about sports)” is the title of Jasmina’s work, a hypnotic chant centered on the womxn’s body, inside out repercussions of intertwined gaze concerning sexuality, sports and wellbeing.

The piece will be followed by two silent films from Alice Guy-Blaché. The Cabbage Fairy (1 min, 1896) is regarded as the first film directed by a women, while Algie, The Miner (10 min, 1912) depicts a city boy who is required to go West to acquire more manliness before his marriage.

After a short break, we will screen the first feature film of Aminatou Echard, Djamilia (84 min, 2018). The documentary, set in the western part of Kyrgyzstan, concentrates on the world of fourteen women aged between fifteen and seventy-two. Through the use of 16mm and a research spanning over several years, Echard manages to create intimate portraits of these women’s lives and provides a glimpse of the complexity of the world in which they live.

OYESYES would like to thank Tracy Hanna for her help and support with this event.

Biographies:
Jasmina Al-Qaisi is formally a visual ethnographer and a cultural correspondent. She writes as she speaks in her own English, caught between sound and visual poetry. She lives in Berlin hides in the archive of the art and project space SAVVY Contemporary.

Alice Guy-Blaché was a French pioneer filmmaker, active from the late 19th century, and one of the very first to make a narrative fiction film. She worked at Gaumont Studios where she made more than 400 short films, then moved to the United States in 1907. Few of her 700+ films survive today. Hundreds were directed anonymously, making it even more difficult to trace her career as a filmmaker.

Aminatou Echard studied Ethnomusicology and cinema. As an artist who works with experimental film and documentary, Aminatou’s focus is how space transforms people and how people inhabit spaces. She conveys this idea by exploring the relationship between sound and image. Fieldwork is a crucial element in her artistic practice. After four years of working in Bolivia in ethnomusicology, she has started a new stage in Central Asia (Kyrgystan, Uzbekistan and Kazakhstan) in 2006 by collecting super 8 images and sounds to gain an understanding of the specific relationship between spaces and people. In 2007 she made Kyrghyz Sketches, a short experimental film from the first collected material and in 2010 Broadway, a documentary produced by the G.R.E.C.