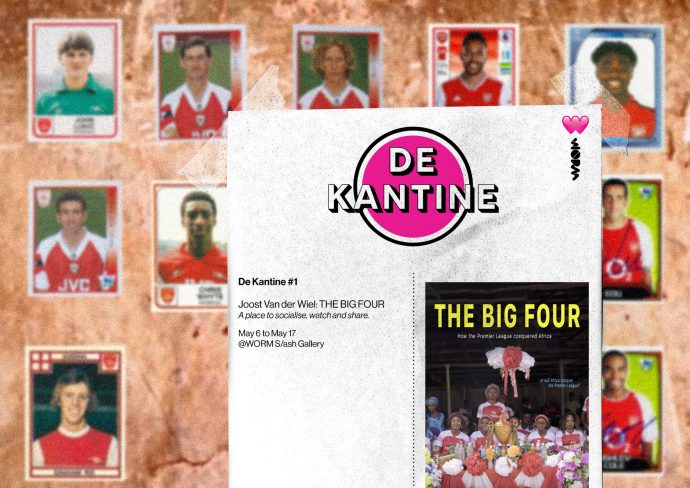 Following the corona developments, this event is cancelled until further notice.

De Kantine is a space specially created to promote three elements that we need in our busy, “big city” lives: socialising, sharing and playing. Over the course of 2020, WORM explores how we can all live creatively and rewardingly in our shared urban environment.

De Kantine hosts various socio-cultural events throughout the month of May. The first – on 6 May – is hosted by Dutch award-winning filmmaker, Joost van der Wiel, who kicks off this month’s programme by transforming the gallery into a “football cantine”.

De Kantine #1 Joost van der Wiel: THE BIG FOUR /6 MAY 2020/
The passion for football is a global phenomenon. Especially in Africa, where millions of people tune in for the English Premier League.
Do you want to watch the games as well? Then come to De Kantine!

So, don’t forget, we open on 6th of MAY an hour before the semi-finals kick-off. We will have a live video stream which we share with fans in Okene, Nigeria! Before and after the matches we screen the short ‘THE BIG FOUR’. A film focused on “The Arsenal Festival”, an event for Okene’s locals to celebrate their favourite English team.

There will be other Kantine events coming soon, when WORM friends will take over S/ash Gallery. Stay tuned for more info! WORM.ORG

The design is inspired by downtown cafes-come-football bars in the El Minho region of Portugal.