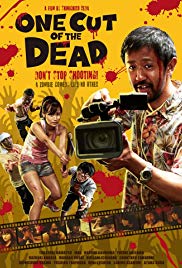 Cultfilm: One Cut of the Dead

A low-budget film about zombies features the best cast money could not buy, but the new actors are not exactly getting along with the crew. Everyone involved is soon receiving a lesson in the merits of perseverance, the preciousness of family bonds and of course the dangers of the living dead, and learns how to act realistically.

Kamera o tomeru na! is an international film festival hit from Japan that missed out on its theatrical release in the Netherlands, but Cultfilm gladly brings to big screen. A zombie film with brains (brains!), a real treat for every horror film maker, and a great example of inventive storytelling.