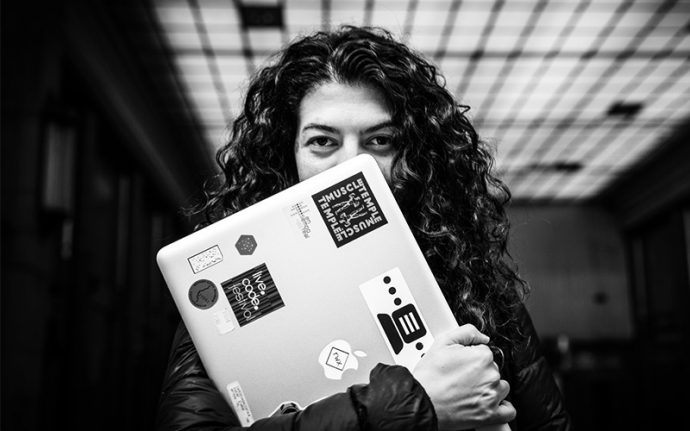 Algo-Rhythms is back in the Avantgardistic State, deconstructing the way we think about the myriad of socio-cultural possibilities that the interface between music and digital technology opens up.

Expect an evening of live coding performances by the duo Anne Veinberg and Felipe Ignacio Noriega, with the telematic presence of Alexandra Cardenas and an algorithmic improv by Netherlands Coding Live community. This event is dedicated to the act of coding as a live artistic intervention; from digital to physical expressions, a myriad of experiments relating code with sound, code to the body, the body to movement and counter-movements. This programme is part of a series co-organized by Joana Chicau, who will facilitate conversations with the performers about their practice and experiences. The talks will focus on the issue of how multilocation collaborative creative coding and algorithmic improvisation may open the path towards more inclusive and gender balanced communities.

Felipe Ignacio Noriega and Anne Veinberg [NL]
Off<>zz is a duo featuring Felipe Ignacio Noriega (live coding) and Anne Veinberg (piano). Our style ranges from blended piano/computer soundscapes, to vibrant grooves and contrary expressions which eventually morph together. The Guide our glance performance will be an interactive experience, inviting the audience to contribute to two elements of our performance. Firstly, to dictate when the pianist and live coder should make visual contact and secondly, to suggest ideas for sound synthesis or musical development. We believe this interaction brings liveness into the foreground, which is a key element of live coding collaborations for us.

Alexandra Cárdenas [MX/CO]
Alexandra Cárdenas [based in Berlin] is a Colombian/Mexican composer and improviser now based in Berlin, who has followed a path from Western classical composition to improvisation and live electronics. Her recent work has included live coding performance, including performances at the forefront of the Algorave scene. She also co-organised a live coding community in Mexico City. At the 2014 Kurukshetra Festival Cardenas was a keynote speaker and hosted a music live coding workshop, the rst of its kind in India. Cardenas has been invited to talk about and perform live coding at events such as the Berlin based Transmediale festival and the Ableton sponsored Loop symposium and held residencies including at Tokyo Wonder Site in Japan and Centre for the Arts in Mexico City. (Main photo courtesy of Ruud Gielens.)

Joana Chicau [PT]
Joana Chicau is a designer, coder, researcher – with a background in classical & contemporary dance – currently based in The Netherlands. She runs a transdisciplinary research project which interweaves media design and web environments with performance and choreographic practices. Chicau has been researching the intersection of the body with the constructed, designed, programmed environment, aiming at in widening the ways in which digital sciences is presented and made accessible to the public. She has been actively participating and organizing events with performances involving multi-location collaborative creative coding/algorithmic improvisation, open discussions on gender equality and activism.