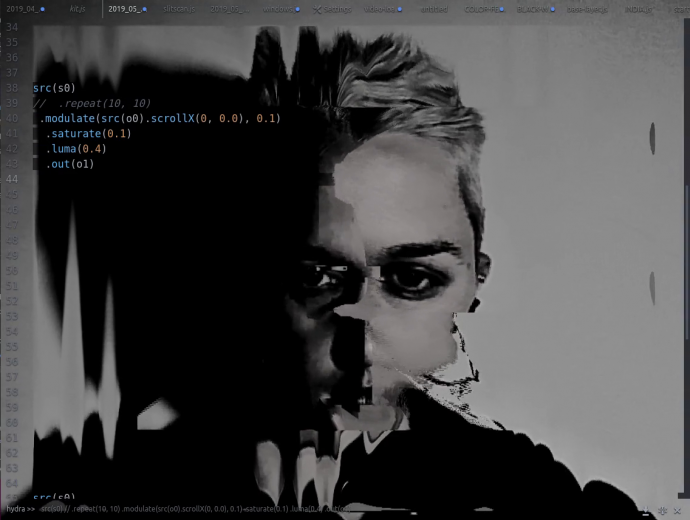 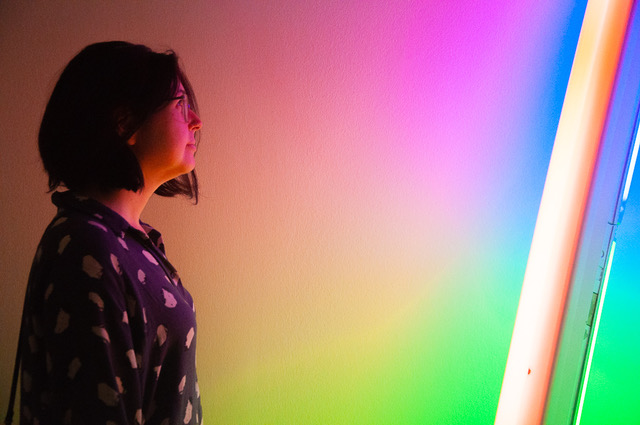 Olivia Jack is a programmer and artist who works frequently with open-source software, cartography, live coding, and experimental interfaces. She is the developer of Hydra, a platform for live-coding visuals inspired by analog video synthesis. In Bogotá, she works with the performance laboratory ATI-erra, creating interactive visuals for dance and theater. She has also created software and interactive installations for CultureHub Art & Technology Center, el Museo de Bogotá, and Oakland Museum of California. Originally from San Francisco, she currently lives and works in Bogotá, Colombia.

Renick Bell is a computer musician, programmer, and teacher based in Tokyo since 2006. His current research interests are live coding, improvisation, and algorithmic art using open source software. He is the author of Conductive, a library for live coding in the Haskell programming language. He has released music on labels, including Lee Gamble’s UIQ, Rabit’s Halcyon Veil, Seagrave, and Quantum Natives. He graduated from the doctoral program at Tama Art University in Tokyo, Japan. Originally from West Texas, he previously lived in New York City and Taipei, Taiwan.

Saskia Freeke creates generative, computational art on a daily basis. Both her works and her practice stand out by their distinctive playful characteristic. By creating her own rules and playfully adapting these as she goes, Saskia applies a notable evolving narrative to her work. The act of Livecoding provides an awesome complimentary context to her discourse – for it is the realtime exercise amongst and in conjunction with creative peers that make her contemporary artistic principles come into full play.

Jonathan Reus is an experimental composer who explores new ways of music making through technological/critical practices. His musical work emphasizes the performer(s) as storytellers within a world of tools with implications, and often involves deep research into new tools and technologies for musical and performative expression.

Timo Hoogland is a livecoder, creative coder, music technologist and educator from The Netherlands. He livecodes experimental electronic dance music. All music and visuals are generated in real time with a custom designed programming environment and language called Mercury. He graduated from the Masters of Music Design at the HKU University of Arts Utrecht in 2019, where he developed Mercury and used it to research and develop algorithmic composition techniques in livecoded music. A paper about the environment was published at the International Conference on Live Coding in Madrid. He has an active role in organizing livecoding jamsessions and Algoraves together with Creative Coding Utrecht/Amsterdam, is part of the Netherlands Coding Live community and has performed at various festivals like Overkill Enschede, Tec-Art Rotterdam, Droidcon Turin and React Amsterdam. He educates creative coding practices at the HKU Bachelor of Music Technology.

Joana Chicau is a graphic designer, creative coder, and researcher with a background in classical and contemporary dance who is currently based in The Netherlands. She runs a transdisciplinary research project which interweaves media design and web environments with performance and choreographic practices. Chicau has been researching the intersection of the body with constructed, designed, and programmed environments, aiming at widening the ways in which digital sciences are presented and made accessible to the public. She has been actively participating in and organizing events with performances involving multi-location collaborative creative coding, algorithmic improvisation, and open discussions on gender equality and activism.

The jam session will be open with Sebastian Pappalardo and Rafaele Andrade.

A ticket for the Hydra workshop gives access to this concert.