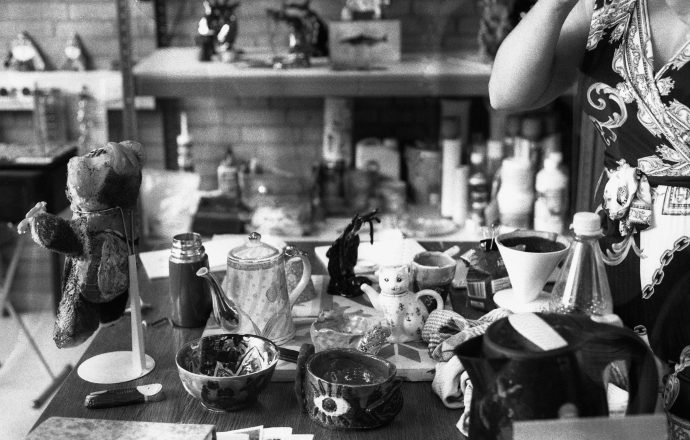 Susanne Khalil Yussef is a visual artist. She will exhibit her interactive work Café Disorient: Razzle Dazzle edition, opening the 8th of November in S/ash Gallery.

Even before passing through the door of the studio, I already had an idea of what I could discover. Right after picking me up at the station, Susanne Khalil Yusef started to talk with me about her projects. Beside the fact that we already know each other for a year and have many common interests (artistically and politically), having a conversation with Susanne is always a good thing. She is a strong and passionate person, who knows how to make people feel at home.

When we entered into the building, she immediately showed me her storage room. It appears that Susanne is an artist who produces a lot, almost in a compulsive way. Both her storage space and her studio are are full of recent works (paintings, ceramics, light boxes, archives…) and of “kitsch Arabic objects”. Seeing Susanne in her studio space is fascinating. Her working environment is similar to her: colourful, warm, welcoming, and political.

While I start to look at her work, Susanne starts to make coffee, and presents me a box of Palestinian baklavas. It’s not the same coffee than the one she will prepare during her exhibition in S/ash, but the intention and atmosphere are very similar.

With a great deal of enthusiasm, Susanne introduced me to her research process. Online, she found various analogue archives, mainly coming from Israel: maps of hidden Palestinian villages that were destroyed during the colonisation, photographs, official documents, drones models, 16mm film from the first colonists, music instruments. This archiving is a Herculean task; she builds up her own archive base, incorporates all the documents she can find, and mixes both Palestinian and Israeli perspectives. She translates the vagaries of this violent history in an accessible and attractive way, showing previously unseen beauty and visibility.

It is not enough to say that her work is activist or even militant, rather it is based on a research practice comparable to journalistic investigation. Like many engaged artists, she translates specific political and social realities (in that case, the colonisation of Palestine by Israel and Palestine’s history and diaspora) into art. Beside the conceptual and visual strength of Susanne’s work, her practice offers much more than a “simple” critique: Café Disorient events are [re]creating communities, and open up a real dialogue, what appears to me as an answer to some of the issues she is working on.

A week later, we met on Wunderbar’s terrace to continue our discussion.

ABM: Does the notion of  “belonging” seem appropriate to describe what you create?

SKY: Bringing people together and creating social links with my art is indeed really important. I never used the word “community” to describe my work, but it sounds pertinent. Lost individuals, and lost communities are part of the Palestinian history. It matters to create connections between members of the diaspora who are too divided and disconnected at the moment. The violence of the situation in Palestine dehumanizes people and broke their unity. The absence of unification in the Arabic world aborts resistance. I’d like us to reconnect and love our community.On a personal level, I don’t feel like belonging to any community. My roots are cut because of the background of my family. My ancestors and I moved from one country to another for decades, which makes it hard and even almost impossible for me to identify to a place as my home. I don’t really know how to situate myself in terms of a cultural background.)

ABM: How did this personal and community background impact the construction of your identity?

SKY: For most of my life I had a love & hate relationship with my Arabic background. Which I still have from time to time. Growing up in Europe gave me a bad feeling about being an Arabic person, it was definitely a barrier. The word Arabic even has a negative connotation in Europe. I finally started to accept my Arabicness, and stopped being ashamed of it. Nowadays I embrace it, I use it to affirm myself. The more I learned about it and about the world I grew up in, the more I started to understand who I am and why I feel like I do. I would say that my identity is still in construction, and I explore it with my artwork. Analysing and creating my own culture is an act of resistance.

SKY: Yes, it’s an active way of “doing” resilience and being resilient. All Palestinians have a trauma, on a personal and communal level. My way of bringing resilience is sharing and creating solidarity, love and understanding for one another.

ABM: Do you position yourself as a Palestinian artist?

SKY: That’s a good question. It’s difficult to answer because on the one hand I’ve built-up this identity, but on the other hand it feels like an easy way of reducing a person into a ethnic box. As if being framed as an artist is not already a frame enough. Working on Palestine is urgent.  I’d like to focus on a medium instead of an idea. However, even when I chose to make work about something else, it always turns into something that has to do with it in one way or another. Especially because everyday new tragedy keeps on happening. People perceive me as a Palestinian artist, but I wasn’t born there and lived in about five different countries. I always say I am Palestinian but in reality, I am more of a displaced person with a Palestinian dream.

ABM: Would you then define yourself as a nomadic artist?

SKY: I never thought about it but that’s indeed a good word. Nomads travel from place to place and have no fixed home; I don’t belong to a nomadic people; our homes are not movable. They were simply stolen and we got kicked out of our ground. Indeed, I moved a lot and quite often, I have several mother tongues, this makes me able to socialise and adapt easily. And I can set up a Palestinian home anywhere.

The Wunderbar terrace, where we were sat, threw up something incongruous appropriate to our conversation.

SKY: I just realized something funny. On the other side of the street, there are two different restaurants, called Tel Aviv and Jaffa. Jaffa is the previous name of Tel Aviv, and it’s where my family is originally from. The name changed when Israel took the city from Palestinians.

Our table was between the two restaurants, almost perfectly in the middle. I asked Susanne to tell me more about the history of her family in Jaffa.

SKY: My parents have never seen Jaffa; my grandmother left this harbour city in 1948. My grandfather refused to leave his home and stayed in our house. When my ancestors left Jaffa, they were convinced to come back after a while, but finally it never happened. They ended up in refugee camps in surrounding countries. We talk about it in my family, it’s a dream to be able to go back there one day and to see it with our own eyes. I went back there a few years ago, and I am still the only one in my family who did it, sixty-eight years’ later! I was able to travel there due to my Dutch passport. Israel doesn’t allow Palestinians to come back to their homes, to cross the border or even to access historical archives. They are super afraid of us. Afraid that we will connect and bond to the ground and that we would make new roots there.

ABM: The narrative is really different depending on the source of the archive (Palestinian, Israeli, Arabic or European). Do you use documents from both perspectives in order to be neutral?

SKY: It’s impossible to be neutral, but I try to show all sides possible. I question the notion of archive itself, and the way we use it. I want to collect a maximum of things, including my personal travel notes. And my next step is other people’s personal stories.

People don’t always understand why it matters to show all perspectives. For example, when I exhibit a mix of Palestinian and Israeli archival material, including images of Israeli flags and soldiers, a part of my audience feels offended or hurt. To them it may feel like normalisation of the Israeli state and its crimes. Which I understand but makes it therefore a very fragile way of communication.

It’s hard to find concrete information about the way the occupation happened. It started seventy years ago; I have to hurry to collect eye-witnesses’ stories; as most of the people are starting to pass away… if they survived the occupation at all.

Art is my answer to those missing stories and hushed up voices.

ABM: With Café Disorient you resist in a different way, by recreating a community. Cafés are an important part of Arabic and Mediterranean cultures. It’s the place where people meet almost daily, the heart of social interactions. In this context, is the café more important than your other artworks?

SKY: It’s indeed very important to transform this exhibition into a café. Rather an artistic reinterpretation of a [Palestinian] café. It creates more dialogue than a “classical” exhibition. It places my research in another context. Creating conversations and interacting with my audience in a direct and simple way makes the experience even more personal. A performative art installation is an ideal way to create interaction. I strive to create an inviting but yet disruptive atmosphere to meet my audience, and consider them as my guests. The coffee I make and serve to them is a special one, which is served for special occasions in Arabic culture.