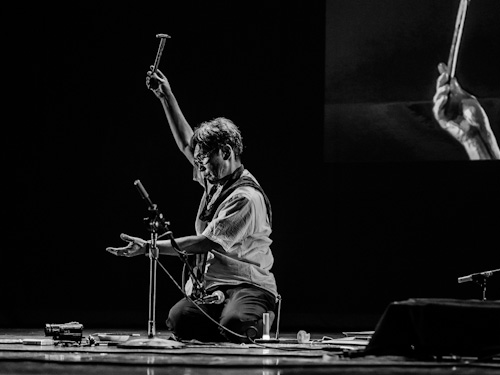 Back in the summer of 2017, the Poetry International festival asked the WORM/Klangendum team to join up with Gozo and make a radioplay together. So they did. This is the first version; recorded in the studio, approximately 5 minutes after they met. This will be broadcast on the 24th of October, at midnight.  The second version will also be broadcast by Dr Klangendum at a later date.

Gozo Yoshimasu (Japan, 1939)
Gozo Yoshimasu is a poet and visual artist. He debuted in 1964 and has since produced poems that explore the boundaries of poetry, language and written text. Repetitions, references, talking in many voices, interruptions, subscripts, blank lines and marginal notes disrupt the narrativity of his poems, and at the same time, highlight the effect and visual representation of (the Japanese) language. Movement is a characteristic of Yoshimasu’s poetry. His readings are based on improvisation, making his poetry ever variable. In addition his poems are located between the tranquillity and the mobility of poetry – emphasized by variation in rhythm, sound and speed. Yoshimasu has published more than 30 collections of poetry and is considered to be one of the key figures in contemporary Japanese poetry.

Recorded June 2017 live at WORM/Klangendum Studio, Rotterdam. Edited and mixed by Henk Bakker. This is a Worm/Klangendum/Poetry International production.