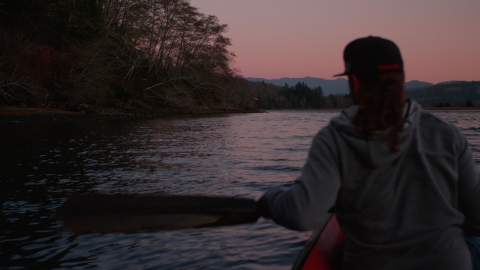 WAWA – Sky Hopinka (2014)
A collage of documentary and ethnography, Wawa opens with reflections on a New York City-based language lesson in chinuk wawa, an Indigenous language from the Pacific Northwest. Reflections point to patterns and linguistic details that reveal shared experiences, transmuting ideas of cultural identity, language and history.

MAɬNI – TOWARDS THE OCEAN, TOWARDS THE SHORE – Sky Hopinka (2020)
Sky Hopinka’s first feature-length film follows Sweetwater Sahme and Jordan Mercier in their search for meaning in the afterlife, the possibility of rebirth, and the places in-between. A poetic and intimate documentary with a circular shape, Maɬni chronicles the origin of the death myth among the Chinookan people in the Pacific Northwest